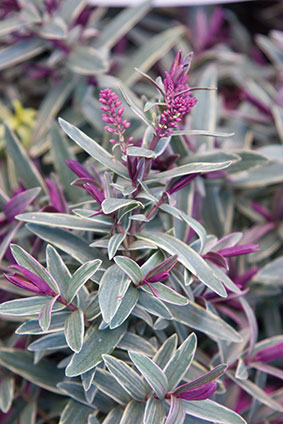 Hebe ‘Marilyn Monroe’ has silver-grey foliage with the new growth an attractive shade of magenta pink.
Dark pink or magenta flowers are produced in late summer through to autumn. Plant size about 50 x 50 cm.

The genus Hebe, named after the Greek goddess of youth, comprises in excess of 90 species and is the largest plant genus in New Zealand. With the exception of one plant (H. rapensis) all the species occur naturally in New Zealand, but some not exclusively, with two also found as far afield as South America. With their ‘forefathers’ coming from the same country that produces such ferocious rugby warriors, one might expect the new Hebe hybrids to have somewhat masculine names. Instead they are labelled with such whimsical names as ‘Marilyn Monroe’ and ‘Wiri Icing Sugar’, perhaps inspired by their delicate growth habits, or beauty, and with a nod to the feminine origins of their genus name.
The hebes of the past were not the easiest plants to cultivate. They could produce beautiful flowers and foliage one season, only to be riddled with rust, twiggy and flowerless the next, due to no fault of the gardeners who grew them, but rather the erratic behaviour of the older varieties. The new hybrids, however, are much tougher. They are disease resistant, have compact growth habits and carry many beautiful blooms. All that they ask for in return is a gentle hand when pruning and good garden management.

When do they bloom?
You can expect flowers from late spring, right through summer into autumn.

Most suitable climate
Hebes enjoy a mild to cool climate in summer rainfall regions. They are accustomed to the cold and would endure light frost. They are probably not the best choice for a warm and humid subtropical garden, but they can withstand strong and desiccating winds near the coast.

What they need
Location: full sun. Morning sun and afternoon shade are ideal.
Soil: plant in compost-rich soil that is very well drained. They don’t like constantly wet feet.
Water: regular watering during warm weather keeps them lush and healthy, but don’t overdo it.
Fertilizing: feed with slow-release 3:1:5 fertilizer during spring, and then every six to eight weeks thereafter until autumn.
Pruning: once the plants have bloomed, trim them lightly to keep them neat.