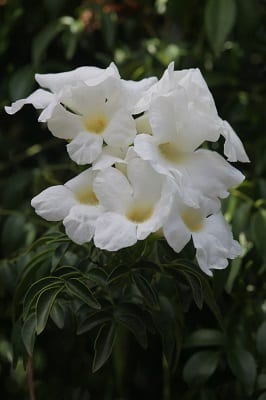 Pandorea (bower vine) comes originally from Australia. It is non-invasive and ideally suited to the southern African climate. The variety ‘Southern PBR has been specially selected for its larger than normal trumpet shaped blooms, which have a dark pink throat surrounded by pastel pink. ‘Southern Belle’ PBR is suitable as a modest climber, but due to its compact growth habit, it is ideal as a container or hanging basket specimen plant.

When landscaping areas, plant ‘Southern Belle’ PBR out in large numbers and they will provide a brilliant floral display. They prefer a sunny to semi-shade position and during dry climatic conditions they need to be watered deeply. Use a balanced fertiliser and a good potting mixture. Pandorea ‘Lady Di’ TM is a white pandorea and is more suited as a climber, in pots or in the garden.