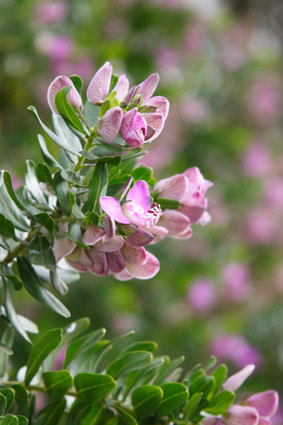 This reliable, well-known species is similar to P. fruticosa and occurs across winter- and summer-rainfall parts of South Africa, stretching from Nieuwoudtville in the north western Cape to the south western and Eastern Cape, to Zululand, and to northern Lesotho.

It occurs in a variety of habitats, including grassy slopes, dune scrub and along forest and stream margins. It forms a medium-sized shrub, growing up to 3 metres tall with an equal spread, and has a rounded crown. Its myrtle-like, linear or oval-shaped leaves are very variable in size, depending on its native habitat. Flower colour also ranges and includes shades of purple and mauve, and there is also a striking white-flowered form with greyish-green leaves, known as ‘White Feathers’. Flowering takes place mainly from late winter to early summer, reaching a peak from early to mid-October, but can also occur intermittently throughout the year.

P. myrtifolia prefers full sun, but will also do well in positions receiving morning sun and afternoon shade. It is fairly drought resistant once established, and grows well in most soils to which well-decomposed organic matter has been added. It is especially recommended for difficult coastal gardens and new gardens, where it will rapidly fill empty spaces and form low windbreaks. Due to the speed with which it grows, the plant tends to lose its leaves on the lower branches or become straggly after about three years; it should be lightly pruned back after flowering to stimulate branching.