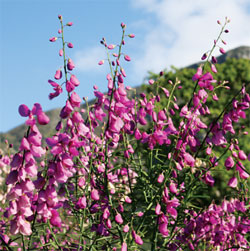 Members of the Polygalaceae family occur worldwide in temperate and warm climates and comprise about 17 genera and almost 1000 species of perennials, shrubs and trees.

Their common names include milkwort, false legume and butterfly bush. While their pea-like flowers superficially resemble those of the legume family, Fabaceae, they are instantly recognizable as Polygalaceae by the feathery tuft on their lower petals. The genus name Polygala was derived from the Greek words poly (meaning much) and gala (meaning milk), and came about because some of the species had a reputation for improving the milk flow in the cows that grazed upon them.

The family Polygalaceae includes the well-known skilpadbessie, from the genus Nylandtia, and purple-gorse (skilpadbos), from the genus Muraltia, but the genus Polygala accounts for more than half the species in the family. There are about 88 species of Polygala that occur in all countries of Southern Africa and most provinces of South Africa, but especially in the south western Cape.

Polygala species are fast growing and of great use to gardeners in Southern Africa. Colourful and free-flowering, they are ideal for sunny spots in a variety of soils and weather conditions, including difficult seaside gardens, fynbos, water-wise and rock gardens, mass plantings, as specimen plants, and even, in some cases, for growing in pots. They are moderately drought resistant once they are established, and forms of certain species are frost hardy. They seed themselves readily and can also be propagated by cuttings taken in autumn or spring. Amongst the many beneficial insects they attract to the garden are honey bees, carpenter bees and butterflies.