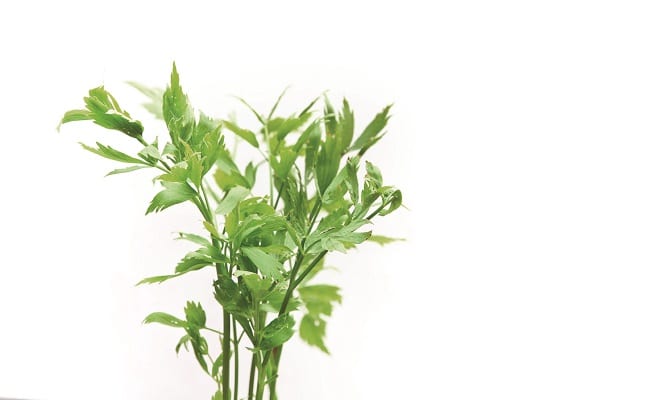 The Wonders of Lovage

Use lovage to revitalise your meatless Mondays! The strong, meaty taste of its leaves is a delicious base for soups, stews, tomato-based sauces, and stock. A little goes a long way.

Lovage (Levisticum officinale) is a lesser-known Mediterranean herb that is also under-rated. This may be because it looks like a larger version of celery, and also has a celery taste about it. You will find though that the leaves have a much stronger flavour and, like bay leaves, add depth to slow-cooked food. Lovage also has other benefits. It is a digestive herb, aids slimming by reducing water retention, is a natural salt substitute, and even helps nearby plants by acting as a natural plant tonic. Every part of the plant is useful.

Vital statistics
Lovage needs space, being a hardy perennial that can grow into a large, leafy bush, 2 m high and 1 m wide. It is an attractive plant with glossy, green, serrated leaves and yellow-green lacy flowers in summer. A big plus is that it can grow in partial shade, unlike many other herbs. In very cold areas it may die down in winter, but will come up again in spring.

Lovage likes … deep, rich soil that drains well. Before planting, loosen the soil to a depth of 60 cm, and then add plenty of compost. Water 2-3 times a week during summer, especially in extreme heat.

Container growing
Plant in a large container and keep its size under control with regular clipping. Feed monthly with a liquid fertiliser and don’t allow the container to dry out. Keep it in a sunny, sheltered area in winter.

Tip for veggie growers
All plants benefit from growing alongside lovage, especially beans, brinjals, chillies, peppers and garden peas. Its small yellow flowers attract many insects that are beneficial to the garden.

Love the leaves
You will soon find lovage to be an indispensable culinary herb. Its rich flavour reduces the need for salt.

Other ways to use lovage leaves
Lovage-leaf tea helps to reduce water retention and can ease digestive problems like flatulence and colic. A word of warning though: if you are pregnant or have kidney problems, you should not use lovage. Lovage leaves can deodorise shoes and help revive weary feet – a traveller’s remedy from the middle ages! Preserve the excess by drying the leaves, preserving them in vinegar, or chopping them up and freezing them in ice cubes. When needed, just drop the ice cube into the pot.

Seeds and roots
Gather seeds in late autumn and dry them out for cooking and medicinal purposes. Put them in muslin bags for use in soups and stews, or sprinkle them on rice, salads and mashed potatoes. You can also add them to herb breads and biscuits. An infusion (tea) of the seed can be used to treat indigestion, colic and flatulence. It is also sufficiently diuretic and anti-microbial to be used for urinary-tract complaints. Lovage seeds steeped in brandy are a traditional remedy for an upset stomach. Skin young roots to remove the bitter taste, and then add them to stews, or boil and serve with French dressing. Older roots can be made into a decoction and added to the bathwater, to help ease skin problems. Did you know: In times gone by, the dried roots and seeds of lovage were ground and used instead of pepper to season meat and broth. It was relished for its hot, sharp, biting taste.

Getting the most out of your plant