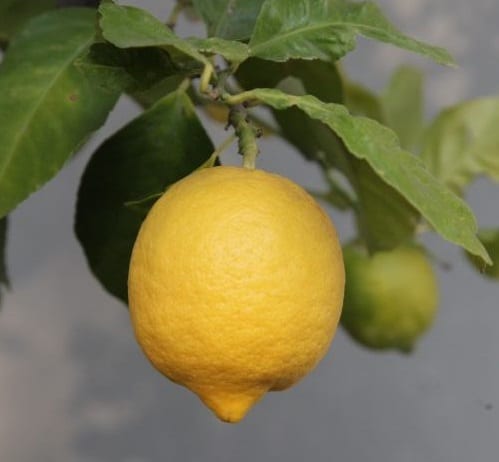 Lemon trees attract a wide variety of lemon pests and diseases, many of which can quickly spread across the tree and onto neighbouring trees if not dealt with promptly. Fortunately most can be treated with easily obtainable treatments.

Of all the lemon pests and diseases afflicting, citrus canker is possibly the most serious. It’s caused by a bacterial infection that results in yellowish, halo-like scabs on the fruits, leaves and twigs. The bacteria is spread by wind, insects, birds, garden implements and anyone who brushes up against the tree. If left unchecked, the disease spreads quickly and can result in blemished fruit, fruit drop, leaf loss and even death of the tree. Treatment is prevention rather than cure, with a liquid copper fungicide. If the tree becomes infected there is no cure and it must be destroyed to prevent the disease from spreading to other trees.

Sooty mould is not a lemon pest or disease in itself, but caused by honeydew, a by-product of the feeding habits of other pests such as aphids, leafhoppers, mealybugs, scale insects, psyllids and whitefly. Honeydew is a sweet and sticky liquid excreted by these pests as they process the large quantities of sap they suck from the plant. This liquid forms an ideal surface for certain moulds to grow on. Without the honeydew, sooty mould will not grow. So, wherever you find sap suckers, you will encounter sooty mould. The mould has branching, thread-like hyphae that give it its shape and colour. The fungi itself does not infect a plant, and its main damage lies in it reducing sunlight penetration to the leaf, affecting the plant’s ability to photosynthesise. This can lead to stunted growth, premature ageing of the leaves, leaf drop or even the death of the plant.

Several soil-borne fungi can result in root rot. It affects the trees’ health, causes the leaves to turn yellow, and causes defoliation and dying back of foliage. Root rot can also attack the fruit if it is spread from the soil onto the plant by splashing rain, watering and irrigation systems. Control is generally through reduced watering and keeping the root crown free from standing water. Prune the lower branches so that they are at least 60cm off the ground and remove leaves and fruit that fall to the ground. Spray with a fungicide.

The caterpillar most often found attacking lemon leaves is that of the citrus swallowtail (Papilio demodocus). The caterpillars, which resemble bird droppings in the early stage, chew the leaves, reducing the plants ability to photosynthesise, which in turn leads to stunted growth. Unless there is a heavy infestation, well-established trees can sustain an attack by these caterpillars. Younger trees suffer most and a handful of caterpillars on a small tree can completely destroy it. Physically remove the caterpillars or spray the tree with an insecticide.

Aphids are notorious lemon pests and vectors for many diseases. A tree can cope with small numbers, but large populations can cause serious damage resulting in deformed leaves, leaf drop, and twig and branch damage. Various preparatory treatments are available for aphid control.

What appear to be tunnels winding their way through the leaf are usually caused by the larvae of certain moths, sawflies, flies, beetles and some species of wasps. The larvae’s tunnelling reduces the leaves ability to photosynthesise, leading to poor growth and low flower and fruit production. The larvae of some species may also chew through the stems and root system. At the first signs of leaf-miner intrusion the tree should be treated with a suitable insecticide. Systemic insecticides offer a better chance of killing the larvae than contact ones, as they are absorbed by the leaf and kill the larva as it feeds.

Citrus thrips are tiny orange or pale yellow insects that feed on the sap of young leaves, fruits and branches. The appearance of silvering of the leaf surface, brown frass markings on the leaves and fruits, grey to black markings on fruits, and deformation of the fruit are signs of citrus thrip. The tree should be sprayed with an insecticide towards the end of a main flowering period. Keep the tree well irrigated and property fertilised to keep its strength up.

Aphids are notorious plant pests and vectors for many diseases. A tree can cope with small numbers, but large populations can cause serious damage  resulting in deformed leaves, leaf drop, and twig and branch damage. Various preparatory treatments are available for aphid control.