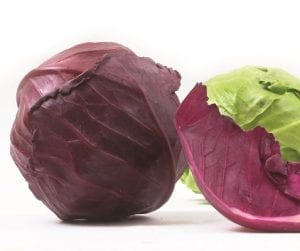 Like all things miniature, baby cabbages have an appeal all of their own. They don’t take up as much growing space as big cabbages (which is an important consideration for small gardens) and they are ready for harvesting a whole lot sooner. If you don’t have a large family then a big head of cabbage can seem to last forever whereas baby cabbages can be used up quickly, which means they are always crunchy and sweet.

Why it’s good for you

Cabbage is in the top ten when it comes to nutrient-rich vegetables, particularly because it contains phytonutrients, which help protect the body from free radicals and which also have a detoxifying effect on the body. Interestingly, red cabbage has more phytonutrients than green cabbage and its vitamin C content is six to eight times higher than that of green cabbage. The red pigment (anthocyanin) is an antioxidant that can help protect brain cells and may even help prevent Alzheimer’s disease. In addition to being full of vitamins A and C, cabbage is rich in phosphorus, potassium and calcium.

If you want to make the most of the health-giving properties of cabbage, then the best option is to grow your own. While not all do, some commercial cabbage grow- ers use systemic pesticides to eradicate aphids and others apply products that can leave residues on the leaves. When you grow your own produce you will know exactly what has or hasn’t been applied to the food you are eating and feeding your family.

Cabbage is best grown as a cool season crop because it tends to bolt when temperatures are high, and the leaves can be tough and bitter. It is also less plagued by pests in winter. Seed can be sown from the end of February through to April and in frost free or warmer winter areas another two succession sowings can be made about four to six weeks apart. Whether you are growing baby cabbages or the bigger varieties the same rules generally apply.

Cabbage needs to be in full sun and grows in almost any kind of soil. Compost should be worked into the soil beforehand because cabbage is a heavy feeder. If you are practising crop rotation then plant your cabbages where beans were grown earlier in the season because they will have enriched the soil with nitrogen.

Sowing seed in seedling trays is preferable because it is easier to space the seedlings correctly when they are transplanted. (If you decide to sow your cabbage in situ then you must prick out the excess seedlings because the cabbages must have enough space to grow.) The seedling trays must be kept moist while the seeds germinate and fairly soon after germination they can be fed daily with a much-diluted plant food to get them growing quickly. Once the plants are big enough to handle they can be transplanted.

Baby cabbages can be spaced about 25 cm apart. The larger-growing varieties should be spaced about 40 cm apart. Rows should be from 30 to 50 cm apart. If the plants are too close together then the heads won’t have space to develop. When setting out the seedlings in the bed, sink them up to the first set of leaves; this prevents the ‘topple over’ effect that often occurs with cabbage seedlings. Because April is still quite warm make sure the soil doesn’t dry out. To get the cabbages growing quickly and strongly feed them regularly with a diluted foliar feed or compost tea. Put down a heavy mulch to reduce weeds and protect the plants in winter.

Pest control is critical and you need to be vigilant, especially for aphids. Once they get into the cabbage head you might as well pull the cabbage out and throw it away (or feed it to the chickens). If necessary use an organic insecticide. Birds may also cause damage as the cabbage will be one of the few green plants in the vegetable garden so use bird netting, especially when the seedlings are planted out. Bird netting always comes in handy in the vegetable garden so the
initial outlay is well justified.

Seedlings need to grow fast during April and May so that they are established before winter. If they are not performing give them a boost with liquid or organic fertiliser. Growth will slow down during winter but come spring they will mature rapidly. Don’t let the soil dry out and keep a thick layer of mulch around them. If your area gets frost then cover the young plants with frost cover overnight but remove it during the day.

Harvest your cabbages as soon as the heads are firm. Leaving them on the plant will not improve the taste or texture. Baby cabbages are generally ready to harvest
within 55 to 65 days from planting out while the really large cabbages need 100 to 120 days. Chinese cabbage is normally ready between 80 to 90 days. If baby cabbages are left in the ground for too long they will get bigger but the leaves will also be bitter.

Cabbage is sweetest when eaten raw – try it with homemade mayonnaise for a real treat! An interesting coleslaw can be made using thinly sliced red cabbage, radishes, red onion, a fennel bulb and celery, all tossed in a yoghurt and sherry or balsamic vinegar dressing and finished off with a dash of paprika. Cabbage is one of the few vegetables that work well with other vegetables in the same family, so don’t be shy to serve it in the same meal as mustard sprouts, radishes, broccoli or oriental vegetables. Baby cabbage is also delicious when steamed then tossed in butter and seasoned with salt, black pepper and paprika. When making potjiekos lay baby cabbage halves on top of the meat so that they cook in the steam. When boiling cabbage the secret is to make the water very salty (like sea water) and boil it without the lid so that the sulphur can escape. That rule can be applied when cooking any of the Brassicas.

Try this delicious cabbage salad with your next fish or chicken meal.