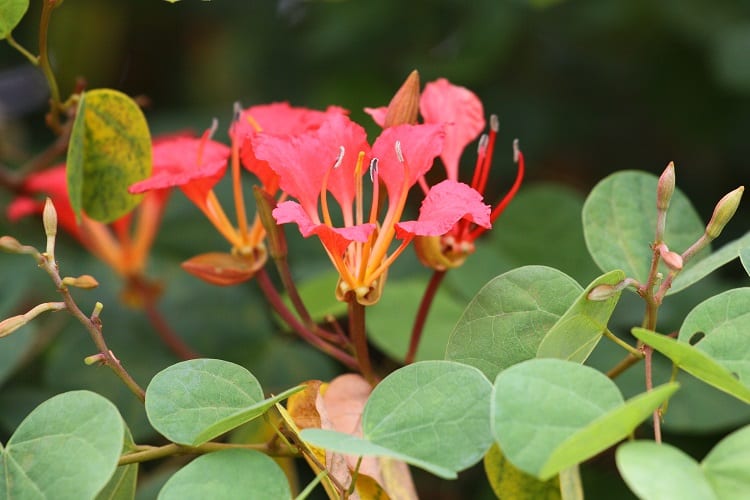 The Bauhinia belongs to one of the world’s largest plant families, the Fabaceae or legume family, which has more than 18 000 species. There are more than 200 different Bauhinias, distributed mainly across the tropics of Africa, Asia and the Americas, but the genus is also represented in southern Africa, where eight species occur. Most common garden varieties are Bauhinia Galpinii, Buahinia Bowkerii, Bauhinia Tomentosa and Bauhinia Petersiana.

They are useful as small to large shrubs, as informal hedges and for screening. The more vigorous species perform well in large, landscaped beds and commercial plantings, whereas the smaller-leafed species can be grown in rockeries and large containers.

In its wild state, Bauhinia Galpinii behaves more like a climber, clambering through the trees and shrubs of the dense thicket vegetation in which it occurs. In a garden setting, however, it can be contained with light pruning as an attractive small tree or large shrub. This species has a greater spread than its height, so allow a lot of space in your garden. It can be encouraged to cover a pergola as well to provide summer shade.

Distribution and habitat of the Bauhinia

As the name suggests, anyone could be forgiven for thinking that this plant comes from the Cape. In fact, it is named after the De Kaap valley, south of Nelspruit in Mpumalanga in the north-eastern region of South Africa. It is much more widespread, however, and can be found right across the moister bushveld areas of the country.

The flowers produce a nectar that is attractive to butterflies, moths and other insects which, in turn, attract insectivorous birds to the garden, including Robins, Sunbirds and White-eyes.

Occurring in a narrow belt in the coastal summer rainfall parts of KwaZulu-Natal to Mpumalanga and Limpopo and extending to southern Mozambique, this shrub or small- to medium-sized tree grows 2-4 m high. Its luminous yellow, nodding blooms appear from December to March and have a large black marking in the throat. The leaves are much smaller than Bauhinia Galpinii and it is not as vigorous, making it suitable as a specimen tree for small gardens, planted in a rockery, mixed shrub border, along fences or even in large containers in a sunny courtyard.

Its roots are non-invasive, and it can safely be planted within brick paving. Once established, it is remarkably waterwise and it benefits from light pruning after flowering. Mature specimens are deciduous in colder parts and can take light frost, but it remains evergreen in mild climates such as in the south-western Western Cape. This is an essential addition to the wild garden as the flowers attract many insects and insect-eating birds.

Bauhinias are long-lived, summer-growing plants and are best planted out in spring. They require slightly acid, well-drained, well-composted soils and full sun. Young plants need heavy drenching until they are well established. Mature specimens are fairly drought-resistant. Although they experience dry winters in their natural habitat, they are not adversely affected by heavy winter rainfall and, once established, can take light winter frost.