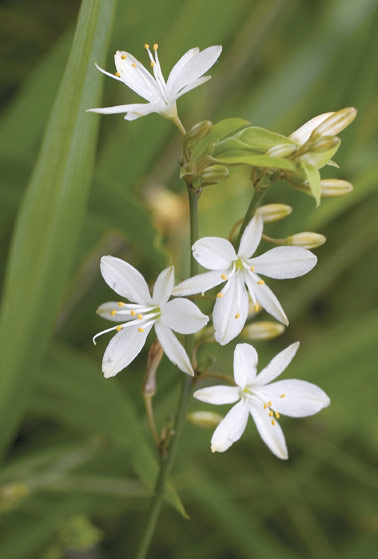 Chlorophytum Saundersiae, or Weeping Anthiricum, is a fast growing ground cover that is useful for low maintenance mass plantings. It also looks good next to water features where it could be planted in between rocks.

Use it in semi-shaded positions under trees or along paths – it is equally at home in full sun as it grows naturally in damp grassland. With this in mind, it could also be used effectively in your grassland (‘prairie’) garden. Many people mistake the Chlorophytum Saundersiae for grass – it is in fact a bulb. If you have a more formal garden, it is best to clip it right down in winter as many of its leaves die off – in summer they will shoot up, lusciously green again! This plant is found naturally in damp grassland.