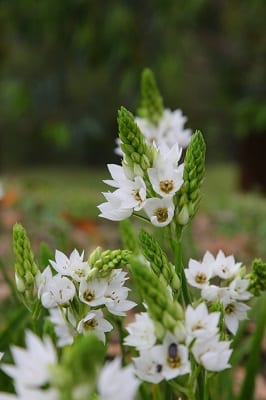 Chincherinchees or ‘tjienks’ belong to the genus Ornithogalum and are members of the Hyacinth family that includes indigenous garden favourites like Eucomis, Lachenalia and Veltheimia.

There are more than 120 species of Ornithogalum and the name is derived from the Greek words ornis and gala, meaning ‘bird-like’ and ‘white’ respectively. In Roman times, bird’s milk was used to describe anything special or admirable.

Ornithogalums have a disjunctive distribution in Africa, the Middle East, southern Europe and western Asia, but most species occur in Southern Africa – mainly in the winter rainfall regions of the Northern, Western and Eastern Cape. There are also a number of summer-growing and evergreen species such as Ornithogalum Saundersiae (Giant Chincherinchee) and Ornithogalum Longibracteatum (Pregnant Onion).

The flowers are star or bowl-shaped and those of most species only open fully on hot, still days, but remain attractive even when closed in cold or rainy weather. Several species are noted for their very long vase-life and Ornithogalum Thyrsoides has been exported as a cut flower to the United Kingdom and Europe, from South Africa, for more than a century – the flowers lasting up to six weeks in the vase. The inflorescence is phototropic, meaning that they bend towards the light and change their direction if moved from one place to another.

Members of this genus are extremely poisonous as the bulbs contain deadly alkaloids and cardenolides that sometimes result in the death of livestock. The species with dark flower centres such as Ornithogalum Dubium and Ornithogalum Thyrsoides are pollinated by monkey beetles.

Winter-growing Ornithogalums are rewarding plants for bowls, pots, window boxes and rockery pockets. The plants are half-hardy and able to withstand temperatures down to freezing for short periods in winter. They like well-drained, sandy soils; full sun; moisture in autumn and winter and a very dry summer. Plants are easily raised from seed sown in autumn or from the separation of bulblets during the dormant period.

The bulbs are not often taken by moles and porcupines but are very susceptible to infection by the Ornithogalum Mosaic Virus (OMV) which is transmitted mainly by aphids, mealy bugs and snails. Winter-growing Ornithogalum bulbs are planted in autumn (April to May). Plant the bulbs shallowly (up to 10mm deep) and drench them no more than once a week. After flowering, the bulbs must be kept as dry as possible. Three of the best species to grow are O. dubium, O. maculatum and O. thyrsoides.

Growing 20 to 75cm high, the common white chincherinchee grows in large colonies and is widely distributed from Namaqualand to Caledon. It is very common around Darling and was cultivated in Holland as early as the late 17th century. Today it is grown worldwide as a pot plant and for its cut flowers. In the wild it is frequently seen en masse in ditches at roadsides, on lower hill slopes and in seasonally inundated, low-lying areas.

It is variable in height, and depending on the form, the pyramid-shaped flower heads appear from early October to late December and the flowers usually have dark brown or green centres. One of the most popular selections of this species for cut flower production is ‘Mt Fuji’, which grows to 50cm high and has a long inflorescence and thicker flower stems than other forms.

Flowering time can be manipulated in this species by storing the bulbs at different temperatures while dormant, resulting in cut flowers being available for a large part of the year. The bulbs like more moisture than Ornithogalum Dubium and Ornithogalum Maculatum during the winter months and can tolerate some moisture in summer, but are best kept as dry as possible during the dormant period. In temperate climates, Ornithogalum Thyrsoides is seen to great advantage when grown in rock garden pockets inter-planted with the mauve, late spring-flowering annual, Senecio Elegans (Wild Cineraria).