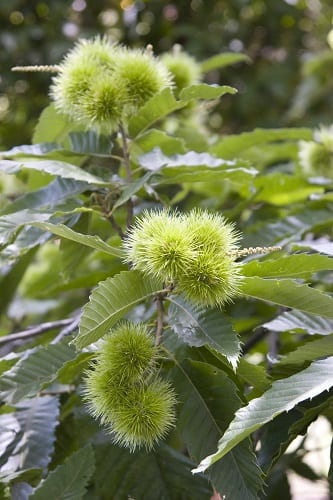 These are the spiny husks of the Spanish Chestnut that are produced on large deciduous trees that grow naturally in parts of southern Europe, North Africa and south western Asia. In South Africa many of these trees are found growing in the cooler climatic regions where they produce copious amounts of these hedgehog-like fruits that encase the edible chestnuts.

Flowers produced in drooping catkins during spring mature into these spiny seed pods which fall from the tree in autumn. The nuts are then harvested from the fallen pods or husks. This tree is used for a multitude of culinary delights. Now trees are seldom grown in commercial, garden or horticultural establishments, although they must have been readily planted in the past.