Home » The Gardener » Birds of Paradise 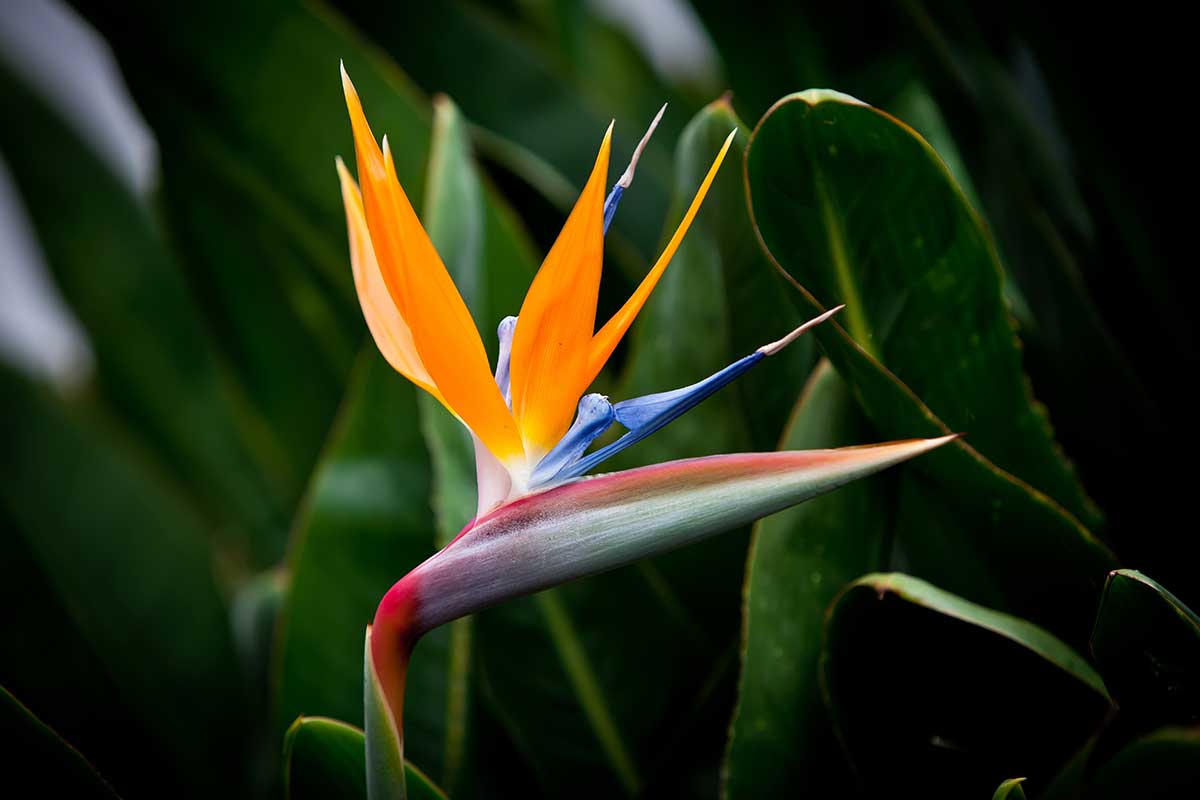 From autumn to spring, when beautiful boat-shaped spathes crested by bright orange sepals and deep-blue petals resembling exotic birds ready to take off in flight appear, we know we do live in paradise after all… At the time (1976) that the decision had to be made about our national flower, it must have been a difficult toss-up between Strelitzia reginae (crane flower or bird-of-paradise) and Protea cynaroides (king protea). Both have unique stunning blooms, and they are both endemic to our country. The protea won the contest, but the crane flower was at least honoured on the reverse side of a 50c coin. And it is so loved by the rest of the world that it became the civic emblem for the city of Los Angeles! The genus name, Strelitzia, has quite a colonial connotation, as it was derived from the house of Mecklenburg-Strelitz, the birthplace of Queen Charlotte, wife of King George lll of England. We have five indigenous species, of which S. reginae, S. juncea and S. nicolai are readily available to the home gardener. Strelitzia alba and Strelitzia caudata, which are two arborescent banana-like strelitzias, are not widely cultivated for the nursery trade.

Five Strelitzia species are endemic to southern Africa, with three of them commonly planted in gardens. The one thing they all have in common is an exotic flower that looks like the head of a crane. There are three upright, bright orange or white sepals and three dark blue, purple or white petals that emerge from a hard, beak-like structure that is called the spathe.

Two of the petals are fused to form a spear-like structure that holds the anthers. The third petal contains large quantities of nectar at its base. This fantastic design not only makes gardeners happy. It is also irresistible to sunbirds that pollinate the neighbourhood strelitzias as they drink the nectar.

Strelitzia reginae (crane flower). This stemless perennial, which has a mature size of about 1.5m x 2m, grows from the Eastern Cape near Humansdorp to northern KwaZulu-Natal. It grows in dappled shade, in coastal thickets and forest margins, and along river banks in full sun. It produces a thick clump of very attractive grey-green, spear-like leaves arranged in a formal, fan-like pattern. Young leaves sometimes have a pink tinge to their central ribs and feel smooth to the touch. The leaves are as popular in the floral art world as the flowers. The inflorescence, produced on a tall and thick cylindrical stem, holds a horizontal, waxy, boat-like spathe in hues of green and rusty purple, and is crested by erect orange sepals and deep-blue to dark-purple petals. The spathe acts as a landing place for sugar birds and the whole package secretes a glutinous liquid they love to feast on while pollinating the plants. These extremely elegant and stately flowers last very well in the vase. The root ball is vigorous and made of fleshy finger-like roots. S

Something to keep in mind is that these plants are very difficult to dig up and move, so plan for their large mature size when planting. They can be divided in autumn if more plants are wanted, but this is a backbreaking job. Also, after dividing the plants it will take a few years before they start flowering well again. Strelitzias can also be grown from the hard black seeds, each with a tuft of bright orange aril, and will start flowering after 3 – 4 years.

Strelitzia reginae ‘Mandela’s Gold’ has golden-yellow sepals and a less robust growth habit. It was selected and hand pollinated around 1970 at the Kirstenbosch Botanical Gardens, where it was first named ‘Kirstenbosch Gold’. It took many years to build up stock of this form for gardeners to plant. It was renamed in 1996 to honour Nelson Mandela.

Strelitzia juncea (rush-leaved strelitzia) is a sought-after species that in nature occurs very sparingly in arid regions near Uitenhage (Kariega), Patensie and just north of Port Elizabeth (Gqeberha). It has long and tough dull grey-green cylindrical pointed stems. The flowers are similar but slightly smaller than those of S. reginae, and are held just below the level of the highest leaf tips. This is a very slow grower. Strelitzia reginae var. parvifolia is believed to be a natural cross between the other two clump-forming species. The rush-like leaf stalks end in small, spoon-shaped leaves resembling butter knives.

Strelitzia nicolai (Natal wild banana) is an arborescent banana-like multi-stemmed plant resembling a tropical palm. Long and thick leaf stems with enormous luscious leaves up to 2m in length are attached to the woody stems. The leaves often tear into ribbons in strong winds, making them look like giant feathers. The compound inflorescences (more than one flower sits double-decker style on top of each other) have dark grey to maroon spathes, white sepals and mauve petals. The interesting, but very messy, sticky blooms appear from spring to late summer.

A vigorous root system and a monstrous size of 12m x 4m can mean that this plant often causes great upheaval in a garden not large enough for it. It eats up foundations and breaks walls with ease. It also sprouts at its base, thickening the clumpy growth in no time! Since this is not a strelitzia valued for its cut flowers but rather its tropical foliage, it has become a very popular large house plant you can keep in a roomy container in bright light indoors. Planting it in a container will inhibit its size for many years without harm.

All the species mentioned here are suitable to grow as focal plants in good-sized containers. Add a good drainage layer to prevent roots from rotting and good quality potting soil, which can be mixed with compost and slow-release fertiliser prior to planting. Water potted strelitzias more regularly (without overdoing it!) and feed regularly during the hotter months of the year with a water-soluble fertiliser.

Reading up about our interesting strelitzias, I discovered quite a few descriptive terms – it is never too late to learn something new: