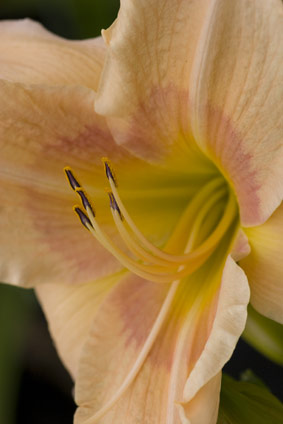 Day Lilies are shrugging off their image as simple, ordinary garden plants. They are still hardy and easy to grow but the range of showy new varieties that become available each season is simply staggering.

The common yellow and orange varieties have given way to exotic specimens in almost every colour, from the palest lavender and pink to vivid red, russet and purplish-black. In vogue right now are blooms with a ring of glowing colour around the throat, known as ‘eyezones’ as well blooms with petals edged in a different colour.

Day Lilies provide a constant display of colour from October to May. Although the individual Day Lily flower lasts only one day, a single plant may produce over 50 flowers in a season. They need at least five hours of sun a day. Darker colours prefer a little shade, otherwise their colours fade. Dormant varieties do best in cold climates while evergreens are better in a hot climate.

They grow in most types of soil but will perform best in rich, fertile soil, so be generous with compost and bone meal when planting.

The only finicky thing about Day Lilies is that they need to be planted at the correct depth. A good tip is to place the crown exactly level with the top of the hole so that once the ground has been filled in and subsides slightly as it settles, the crown should be in the correct position, just 2 cm below the surface. Thereafter they should be watered well.

Once established, they are low maintenance plants that grow happily alongside other plants. Increase watering when the leafless stalks, called scapes, start to appear. The scapes extend above the leaves and bear the flowers. Most scapes have two or more branches, each with several flower buds. Early scapes can be broken off to strengthen the plant and produce better blooms. Fertilise at the beginning, middle and end of the season with 5:1:5 or 3:1:5.

Plants in pots should be fed every 10 weeks. Small plants can develop midway up the stem of the Day Lily at blooming time. They are called ‘proliferations’ and can be removed and potted, once the scape has finished flowering. In autumn divide your Day Lilies and share them with a friend!

Day Lily or Daylily? Although the spelling was consolidated into a single word in 1923 upon the recommendation of the American Joint Committee on Horticultural Nomenclature, many gardeners prefer to use ‘Day Lily’.

The Day Lily is a member of the lily family Liliaceae, as are such plants as onions and hyacinths, however whereas lilies are in the plant genus Lilium, Day Lilies are in the genus Hemerocallis.

There are more than 30 000 named cultivars of Day Lilies registered with the International Registration Authority – quite impressive when you consider that they all have their origins in less than twenty wild species that were originally found in China, Korea and Japan!

The roots, leaves and flowers of the Day Lily were used by the ancient Chinese for food. They also used the roots and crown for medicinal purposes.