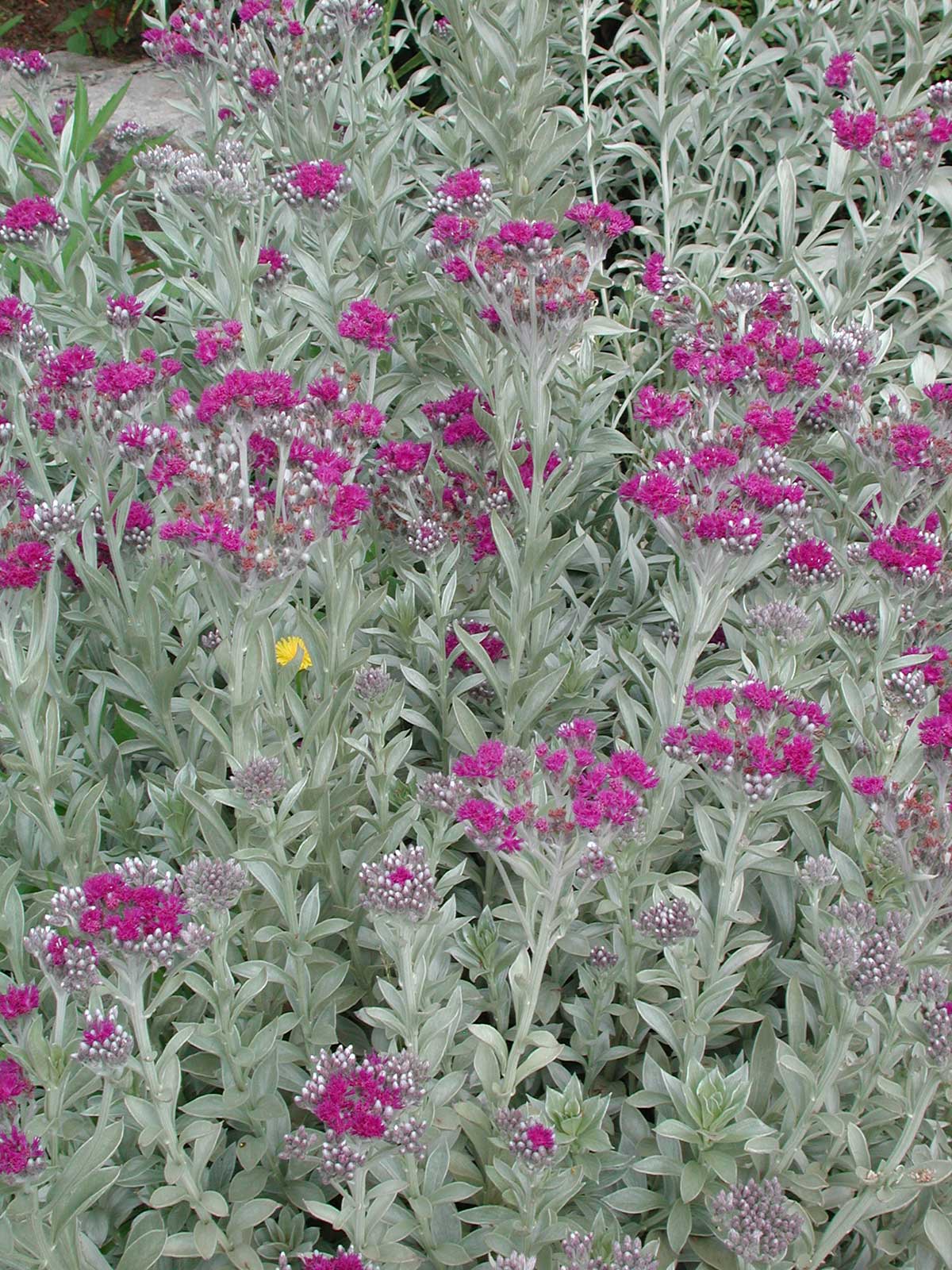 The silver vernonia is a striking member of the daisy family Asteraceae. Previously well known as Vernonia natalensis, it underwent a radical name change to Hilliardiella aristata when the genus Vernonia was revised several years ago. Some of the Vernonia species were transferred to the genus Hilliardiella, named after the botanist Dr Olive Hilliard, who studied the Asteraceae of KwaZulu-Natal.

Silver vernonia is widespread in the summer rainfall area of South Africa, including the Eastern Cape, KwaZulu-Natal, Free State, Gauteng, Mpumalanga, Limpopo and North West, and its distribution extends to southern tropical Africa. It grows in open grassland and on rocky outcrops in heavy soil in full sun, in scattered groups or sometimes in large stands. This erect, clump-forming plant has a perennial woody rootstock and usually grows 80cm – 1m high in cultivation. The plant sends up new shoots in August after the first spring rains, flowers in early summer (November to December), continues growing until late summer, and dies back completely in autumn.

The silvery lance-shaped leaves are covered with thin whitish hairs, and the flower heads are produced in flattish, deep mauve or purple clusters, with prominent styles and stigmas. In mid-summer the light, downy white seeds mature and are carried away by wind.

Silver vernonia is a very under utilised as a garden plant. It is ideally suited to cultivation in most parts of South Africa, including those receiving moderate frost. Full sun suits this plant best, and it likes a fertile, loamy soil and regular heavy watering from spring to late summer, and easily withstands dry winters. It is not adversely affected by winter rainfall, provided the soil is well drained, and it has adapted very well to the winter-rainfall climate at Kirstenbosch. Its bright silvery foliage stands out beautifully when used in mixed plantings with summer-growing perennials like the bell agapanthus (Agapanthus campanulatus) and the spotted calla lily (Zantedeschia albomaculata), or alternatively when interplanted with winter-growing corms like the small cobra lily (Chasmanthe aethiopica) or evergreens such as the bugle lily (Watsonia pillansii).

Plant them in spring or summer in rock gardens, herbaceous borders or deep pots, and provide a thorough initial watering, after which a heavy watering once or twice per week is sufficient. After the stems have died back in autumn, cut them down to ground level, and in areas subject to frost, provide a mulch of dry leaf matter. Once established the woody rootstocks are very long-lived, lasting several decades in ideal conditions.

The flowers attract butterflies and honey bees to the garden, which in turn provide food for insectivorous birds. An additional attribute is that the plants are almost never subject to pests and diseases. This species is used in traditional medicine to treat fevers, malaria, coughs and pain, and is also an ingredient in medicines used during pregnancy to ensure healthy mothers and babies. The roots and leaves also have magical uses as charms against lightning. Propagation is by division of thick clumps in late winter, by seed sown in spring, or by tip cuttings taken in early summer.

Silver vernonia is not easily obtainable from nurseries in South Africa, but seed is available from Silverhill Seeds (021 762 4245).